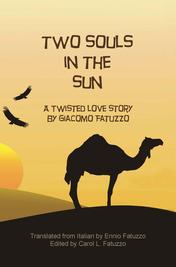 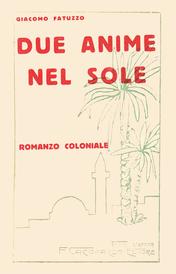 My father, Giacomo Fatuzzo, was born in Vittoria, Sicily in 1900. He was a mathematician by education but chose to become a career officer in the Italian Army. As a young lieutenant, he was sent to Libya in the mid 1920's -- first for training and then to patrol the borders of what was then an Italian colony. At that time he was already engaged to my mother, but she stayed in Italy until 1933. Then, they finally were married; and she joined him in Bengazi, where I was born in 1934.

It was during those early years in Libya, when my father was alone in a foreign land, isolated by language and culture from those around him, that he wrote the book, "Due anime nel sole -- romanzo colonial." It was published as a novel, in Italian, in Libya, in 1929. But is it entirely fiction? My father died many years ago, long before I found this book and read it. So I can't ask him. And I only knew him as my father -- a person far different from the young man in his story.

When I finally read this book, I found it compelling, beautiful and still meaningful in today's fast-paced world. My father's almost poetic descriptions unveil unfamiliar and desolate landscapes of breathtaking beauty and power, and introduce the strange yet enticing people of colonial Libya. Yes, "Two Souls" is a love story, but not a simple one. It explores the toll isolation takes on the human mind and the dark and deadly twists of a love that turns to obsession -- issues still with us today.

I wanted to share this enticing work of art that has been lost in the passing of decades with a modern audience. Therefore, with the help of my wife Carol, I have translated this book into English, and it has become "Two Souls in the Sun -- A Twisted Love Story."

Two Souls in the Sun